The most massive concentration in European history. This is the result of the Catalan Way 2014, which has filled the Gran Via de les Corts Catalanes and Avinguda Diagonal for over 11 km to form a huge human mosaic that looks like the Catalan flag from above. The mobilization has become a new show of strength to find a peaceful way to vote and win the consultation of November 9th.

The mobilization was organized by “It’s Time”, a unified campaign sponsored by the Catalan National Assembly (ANC), and it is the turning point to face the consultation of November 9th and get a “Yes” majority result for independence.

The mass concentration reached its peak at 17:14 pm with a symbolic vote by a Catalan teenager who be 16 years old next November 9th, the minimum age to be able to vote in the consultation. Then there were several speeches, a large wave over the entirety of the route, and a “symbolic vote” in which participants were asked to raise their fingers to signal the “V” and Victory. 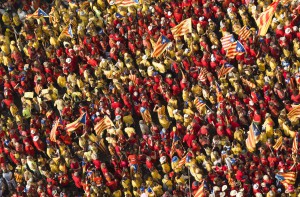